This year’s walk was a challenging 24 miles planned by Ian Maclennan, exploring some of the more remote parts of the Elan Valley and high moors, as well as the main reservoirs themselves.

The meeting point was the New Inn at Newbridge-on-Wye, a 16th century coaching stop. Some twelve of us made the journey across the spectacular rolling hills of mid-Wales to this comfy pub for the Friday night, and Friday night in Newbridge not being like Friday night in Birmingham, we doubled the number of people there.

Inside the saloon Mac had installed himself in a command position, handing out detailed route plans and maps. Several others had also installed a few pints of beer, the local Double Dragon being particularly good. Present, amongst others, were Ian and Mary Chesner, Peter Hillenbrand, Brian Johnson, John Delamere and John Simmons. I also had my first meeting with the Wright brothers, Paul and Andrew (and Andrew’s fiancé Arlene). Alex was nowhere to be seen, and I was quite surprised the sturdy veteran hillwalker was already in bed!

The early part of the walk was of unique character to the rest of the day. It was overcast. We headed uphill, soon leaving the road and a farm behind, onto steep moorland with tussock grass underfoot. We had the hills to ourselves (given the time!) and the environment reminded me of the Berwyns, with a feeling of remoteness commonly found on the hills of mid-Wales which still surprises me whenever I go. Ahead I could see Mac surging uphill towards the first high-point of the day, Drum Ddu (538m). This was soon followed by Can Y Gamriw (604m), from where it was downhill to the reservoir. A line of stone pillars marks the crossing into the Elan watershed at this point, a total area of 71 square miles purchased by the City of Birmingham in 1894 in order to allow adequate drainage to create the reservoirs for the city’s drinking water.

Funnily enough it was quite boggy, and you could be prone to losing a leg knee-deep in the bog. Fortunately, the rough-going was more than compensated by the view of the surrounding valley and wood-lined reservoir, particularly resplendent as the cloud began to lift, allowing sunshine to break through.

We reached the edge of Caban Coch reservoir, around 6 miles from the start, done in just over 90 minutes of rough country. Looking round, we had left some of the group behind, surprisingly enough the younger part on the whole. At this point the group split roughly into two, to allow people to walk their own pace, or to try and keep up with Mac. 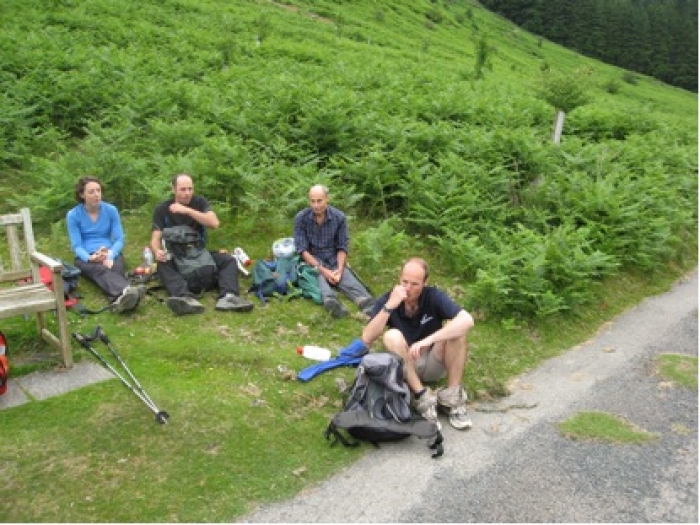 From here the walk followed the edge of the reservoir, hugging its bank to reach a crossing point at the south-western tip, before heading along the far side of the reservoir northwards through coniferous woodland. After a couple of miles where the path seemed to head away from the reservoir and the view screened by trees, we headed steeply downhill to the dam separating the Caban-coch and Garreg-ddu reservoirs. This particular feat of Victorian-Edwardian engineering is marked by the dome-roofed Foel tower, the starting point of the 72 mile journey for the water supply to Birmingham.

Some of the group had planned to take a short-cut across the bridge formed by the dam through Elan village and back to Newbridge. The going was so good though that all pressed on once again into woodland that eventually broke into boggy meadows lined with wild orchids. Here was the halfway point, and Mac allowed us to stop to have some lunch and his joints some aspirin.

Dozing in the sunshine was soon cut short and we were off again along the reservoir, to leave it for more woodland at its northern tip. Weighed down by lunch and what was turning into a warm afternoon, we headed steeply uphill to gain high-ground overlooking the Wye Valley. Our path crossed the plateau and descended, heading toward the village of Rhayader in the distance. Our walk took a southern turn a few miles from Rhayader though, joining the Wye Valley Walk through farmland and fields, and for part of the way alongside a dismantled railway, to the Wye-Elan confluence. 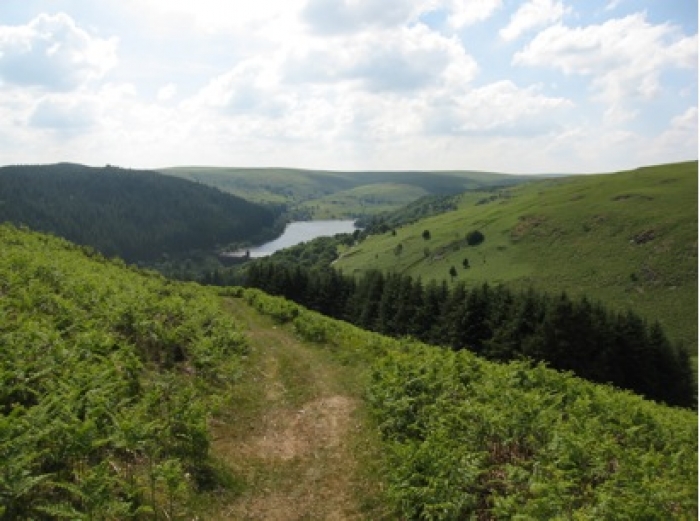